Below is a note by Father Kevin Barr recording his encounter by telephone and text with Fiji's Dictator Bainimarama. The dictator abused and threatened him over the phone and text messages following a letter to the Fiji Sun editor by Fr Barr making reference to a Chinese Flag being included in a new Fiji flag following announced changes by the Dictator himself.

As often told by others who know the Dictator, this type of angry, abusive and threatening behaviour where, swear words flow profusely from his mouth, is fully in keeping with how he treats those he dislikes. It just goes to show how Fiji and its people are being forcibly ruled by a mentally unfit lunatic who has no qualms whatsoever of abusing even a priest. Let the world know of this vile and vindictive behaviour from someone who dare call himself the leader of a government, be it an illegal one.

Read the note below with bold emphasis included by me. 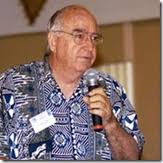 A SURPRISING DAY IN MY LIFE

On the 8th January 2013 The Fiji Sun published I short letter I had sent in to them. The letter noted that a change was to be expected in the Fiji Flag to represent changed realities in Fiji. With tongue in cheek, I asked : “Is the rumour true that the Union Jack is going to be replaced with a small version of the Chinese flag to show that our old allegiance to Britain is being replaced with a new allegiance to China?”

On the morning of the 10th January I was at my desk at the PCN Office when the phone rang and someone who said he was a Colonel in the Prime Minister’s Office asked if this was my number.  I said it was and he hung up.  A few minutes later I received a call from the Prime Minister.  I greeted him and wished him a happy New Year.  Then in a very angry voice he said that I should apologise to the people of Fiji for my letter concerning the Fijian flag in the newspaper.  I said that I thought it expressed a real concern with a touch of joking humour.

The PM said it was irresponsible coming from a recognised leader in the community.  He stated he was not a Catholic but a Methodist. He then called me “a fucked up priest” and said I had become anti-government. He said he used to try and help me but would do so no longer.  I said I would be prepared to come and speak with him.  Instead he repeated I was a “fucked up priest”, threw in a few swear words, told me to go back to where I came from and put down the phone.  His tone was angry and really over the top.

Our Director (Semiti Qalowasa) and Assistant Director (Savu Tawake) were in the room and were able to pick up most of the angry statements of the Prime Minister.  They were rather shocked and remarked that the words about China must have hit a sore spot.

A few minutes later there was a text message on the phone from the Prime Minister which read:

“I think you owe the people of Fiji an apology for your childish comments.  You give all Catholic priests a bad name."

It seemed more of a calm message.  I replied saying I was sorry if he was upset by my letter and I apologise.  However many people were concerned about the influx of Chinese into Fiji.  I said I would always be happy to meet with you and discuss issues.  I am not anti-government but disappointed with some developments.

I was about to go to lunch when another text message arrived saying:

“Fuck U arsehole.  Stay well away from me.”  I texed back: “Thank you Sir for the nice words. If you want me to apologise I will do as you wish.”

As I was having lunch another text arrived:

I did not reply.    Then came the final text: “Go and be  a missionary in China”.

I laughed as there was a touch of humour there.

When I returned home about 4.15 there was an apologetic call from the Ministry of Housing saying they had been directed by government to withdraw my membership as a Member of the Housing Authority and Public Rental Board and that a letter would soon be delivered to me on that issue.  In some ways I was expecting this vindictive reaction.  I also suspect that others apart from the PM were involved. The Land Force Commander is noted for his coarse language and the AG for his vindictiveness.

What surprised me was not only the coarse language used by the Prime Minister but his over-the-top angry and uncontrolled reaction.  I have heard that he has treated others in a similar way and aims to intimidate.

Those who heard of the above exchanges were shocked and very concerned that the Prime Minister could act in this way.  They were also concerned for me.  I do not intend to be intimidated.

I think the comments made by the leader of our nation is very childish.He should apologise to father Kevin Barr.Anyway he will not do it.Wow when i went to america and was asked by an american lady where i came from i said "Fiji".She said " oh fiji is like paradise,isn't it?"Well I said I don't know.Now reading this article I began to think that in paradise angels don't swear but now in fiji our prime minister is doing it.I thought leaders are suppose to lead by example..Hmmmmmmmmmm Food for thought????Well thanks Mr Lealea for posting this article online.