A Vision Of The Lost

A Vision Of The Lost

On one of my recent journeys, as I gazed from the coach window, I was led into a train of thought concerning the condition of the multitudes around me. They were living carelessly in the most open and shameless rebellion against God, without a thought for their eternal welfare. As I looked out of the window, I seemed to see them all . . . millions of people all around me given up…

Who is Bainimarama & Khaiyum Fooling?

Having to end today with the news of the Fiji military regime finally unveiling its final version of its Constitution for Fiji can only be described as a real painful experience, yet unexpected. 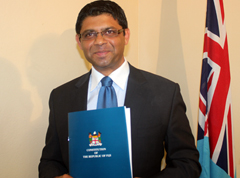 Painful when the occasion is being overseen by Khaiyum who, like a half castrated tom cat, put…

Jesus asked Bartimaeus,"What do you want me to do for you ?" The blind man said,"Teacher,Iwant to see." Mark 10:51 (CEB).( Au sa via rai,au sa via.Me nomuni na vakarokoroko.) The biggest thing you can ask as a human being.You're asking the owner of life. Jesus' miracles prove that God cares about human needs.Jesus' miracles were usually focused on helping someone. His miracles impress me not so much because of their display of power but because  they reveal Jesus' caring heart.The miracle of…

Is once saved always saved true?

Or is it only giving false security?

This subject is one that I believe the devil has done much damage. If a person is saved and tormented by guilt and shame, then the devil will accuse them of not being saved. This is used by the enemy to bring much fear, torment and condemnation into a person's life. There is no need to fear losing…

Some hard facts against once-saved theology

I would like to point out some hard facts in the Word of God which cannot be overlooked.

Fact: a person can be "in Jesus' mouth" and be spit out for being lukewarm.

Jesus' own words on the matter

For some reason, passages like this don't settle well with the once-saved, always-saved theology.

Every branch in me that beareth not fruit he taketh away: and every branch that beareth fruit, he purgeth it, that it may bring forth more fruit... If a man abide not in me, he is cast forth as a branch, and is withered; and men gather them, and…

Those who don't love others have no eternal life

The great commandments that Jesus gave us was to love God with all our heart, mind, and soul, and to love one another as He has loved us. Jesus was very serious when He gave us this commandment, and it is repeated throughout scripture.

Master, which is the great commandment in the law? Jesus said unto him, Thou shalt love the Lord thy God with…

Being sure of your salvation

Can we be sure of our salvation and rejoice in the Lord of our salvation? Yes, absolutely! But first we must know where we stand with God, and what is required of us. What does God require of us? To walk in the light and have fellowship with one another:

Where to Find Comfort and Encouragement in the Psalms

Jesus said,"How hard it will be for those who have wealth to enter the Kingdom of God!"...the discilples said to one another,"Then who can be saved?" Jesus said,"For mortals it is impossible,but...for God all things are possible." Mark 10:23,26-27. (NRSV) ( E ra sega ni yatuni tu na CONTAINER mo drau lako vata ki na vanua ko sa lako tiko kina. Tukuna o Jope,"ko lako luveiwale mai ka luviwale lesu tale.") We are buring a brother in law today who is a business man.Everything is left behind and…

The Lord makes me lie down in green pastures; he leads me beside still waters;he restores my soul. Psalm 23:2-3 (NRSV)  (E da vakaqara tu ga na vakacegu e na vuravura e da bula lako kina oqo. I don't know the future holds,but I do know that God will be with me every step of the way. In a world that changes daily,we find peace and contentment in believing the promises of God,who never changes.When was the last time you felt lonely? The next time you feel that way,look around. Everyone else…

Come back to me

If anyone is in Christ,there is a new creation:everything old has passed away....! All this is from God,who reconciled us to himself through Christ,and has given us the ministry of reconciliation. 2 Cor.5:17,18.(NRSV). ( Oi keda kece e da rawa ni veisau ke da tauri Jisu me noda I vakabula.) As a minister of the new Covenant,Paul defended the sincerity of his ministry.Paul also  illustrated that salvation was received by accepting the gospel rather than by trying to keep the jewish Law.Our…

There is a book called “Prayer Passport to Crush Oppression” by Dr. Daniel Olukoya that contains prayers for dismantling cancer which can be a demonic attack, such as this prayer:

Using God’s Word in proclamation is an important part of spiritual warfare. Develop the habit of applying the Word of God personally, as if God is speaking His Word directly to and through you. That is to state – particularly aloud –…

In the name of Jesus Christ, I bind every spirit that is not the spirit of God.

I break their power and command them to leave me…

Winner of the US Rugby 7s

New Testament writers definitely state the Old Testament does have value. Jesus Himself said: “Think not that I am come to destroy the law, or the prophets: I am not come to destroy, but to fulfil.For verily I say unto you, Till heaven and…