How Satan Stops Our Prayers 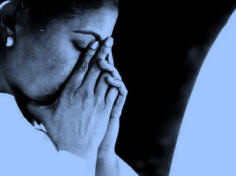 How satan Stops Our Prayers

When the Earth Shakes

When the Earth Shakes
by Melanie Hemry

Thursday, January 13, 1994 - Thousand Oaks, California Brenda Steen stepped into the sanctuary of Thousand Oaks Christian Fellowship and sighed with contentment. Although there were no services today, no loving faces and happy voices to greet her, the silent sanctuary was warm and inviting. Brenda alongside her husband, Arland, had started this church 13 years ago. In those years, they had seen lives…

The True Tale of Two Cities

The True Tale of Two Cities

Many Bible prophecy watchers know from events in Israel that "the battle for Jerusalem" has begun. But do you know the battle is really for two Jerusalems?

A few years ago, I first walked into one of the oldest synagogues in Jerusalem. There on the wall was a painting of the heavenly Jerusalem in the clouds over earthly Jerusalem. It was…

The Source of Everything

But who am I, and who are my people, that we should be able to offer so willingly as this? For all things come from you, and of your own we have given You.

When it came time to build the first temple in Jerusalem, King David set the examples by being the first to give. He gave 3,000 talents of gold and 7,000 talents of silver out his pocket--about $3.14  billion and $5.5 million…

The more time we sit at His feet, the more intimately we will know Him!  And the more we know Him, the more we will feel loved, secure, and confident.  "He has taken me to the Banquet Hall and His Banner over me is Love." (Songs of Songs 2:4).

Intimacy is not approached with a sense of duty, it is a love relationship…

Step Out in Faith and Do It!

Step Out in Faith and Do It!

It's not that you don't know this, it's that you keep forgetting it and need to be reminded of it: God can use you! Yes, the same God who worked through Moses and Esther, Deborah and Paul, works today through imperfect people like you and me. He can give you victory in the place of defeat and turn last year's…

“Beginning with Moses and all the Prophets, [Jesus] explained to them what was said in all the Scriptures concerning himself.” (Luke 24:27 NIV)

Only God could have put the Bible together. It is 66 books written over 1,600 years by 40 different authors — and it has one theme. It is one of the…

The Bible says, 'Let none of you suffer as a murderer, a thief, an evildoer, or as a busybody in other people's matters. Yet if anyone suffers as a Christian, let him not be ashamed, but let him glorify God in this matter. For the time has come for judgment to begin at the house of God...' (1 Peter 4:15-17 NKJV) When Satan attacks you…

Jesus Trusted the Bible. You Should, Too

Jesus Trusted the Bible. You Should, Too
by Rick Warren

“For truly I tell you, until heaven and earth disappear, not the smallest letter, not the least stroke of a pen, will by any means disappear from the Law until everything is accomplished.” (Matthew 5:18 NIV)

You may have heard someone say, “I trust Jesus, but not the other guys who wrote…

The Bible Is Historically Accurate

The Bible Is Historically Accurate
by Rick Warren

Born in Lincolnshire, England, Hunt was the first missionary to Fiji to have had theological training (Hoxton, 1835). Ordained in 1838, he proved an effective evangelist in Oxford and Australia before he went to Fiji in 1838. He stated his goals for Fiji were (1) the conversion of the Fijian people, (2) the…

The psalmist David, there, is trying to…

Building Your Life on the Rock

Building Your Life on the Rock
by Rick Warren

“Everyone who hears these words of mine and puts them into practice is like a wise man who built his house on the rock. “ (Matthew 7:24 NIV)

We all want God to bless our lives. For God to do that, we need to get into his Word.  Over the last few days, we’ve been looking at the four ways James 1:22-25 says we…

What is it with the atheists these days? Lately I’ve read a lot of web articles written by angry atheists including many news articles about those crazy Christians and what superstitious fools they are, and that science has proven there is no God and Darwin was right and blah, blah, blah, ad infinitum, ad nauseum.

Well I disagree with them all. I am a…

What is the Apocrypha? Why aren’t these Books found in the Protestant Bibles?

What is the Apocrypha? Why aren’t these Books found in the Protestant Bibles?

What is the Baptism for the Dead?

What is the Baptism for the Dead?

Paul wrote some very interesting words in
I Corinthians 15:29. Do you know what they mean?

What is the baptism for the dead?

Ask a Mormon, and they will tell you with great zeal. They believe you can be baptized underground in…

It is important to learn how to love your family with the love of God. This can be a challenge, because many of us have at least one or two relatives who irritate us to no end. However, God requires us to love everyone - including those not-so-easy-to-get-along-with family members. The…

Being a Good Thing

Being a Good Thing
by Deborah L. Butler

A good thing is…

You have sown much, and bring in little; you eat; but have not enough; you drink but still thirsty, you clothe but there is none warm; and he that earneth wages to put into a bag with holes.

An encouragement advice from prophet Haggai, and as we continue our life journey.

God, family and others. When God comes first in our lives, everything will flow. It was imperative that blessing from God…